Traveler Series libraries focus on delivering a genuine purity that can only be captured where the instrument and musical style originated, preserving its true character and history. We seek out a region’s most skilled and renowned performers; amazing folks with stories and bloodlines who live and breathe traditional provincial music. We leave with an education and appreciation for their culture and the role these beautiful instruments serve (as well as a tale or two of our own). We hope our Traveler Series adds an authentic native spirit to your music.

The fiddle is one of the most important instruments in Celtic music. The fiddle itself is identical to the violin, however it is played differently in widely varying regional styles. Compared to classical violin, Celtic fiddlers tend to make very little use of vibrato. Melodies are embellished through forms of ornamentation, such as cuts, rolls and a variety of grace notes. Slow airs are occasionally performed, but the style is best known for fast, snappy reels and jigs.

For our Celtic Fiddle we journeyed to Dublin, Ireland where we had the honor of working with award winning fiddler Niall Murphy. Niall has carved a reputation for himself in traditional Irish folk circles as a live performer and session player. A veteran of the trad scene, he has shared the stage with The Chieftains, Sinead O’Connor, Van Morrison, The Dubliners, Alison Krauss and many more. We also had the pleasure of recording at Herbert Place Studios with producer/engineer James Darkin, who was an accommodating and gracious host to us weary travelers and did a fantastic job of running the show.

The Traveler Series Kontakt instruments feature a clean and simple, 1-page GUI with all the controls you need to get the most out of the library, including our TACT (Total Articulation Control Technology) and an 8-slot FX rack. 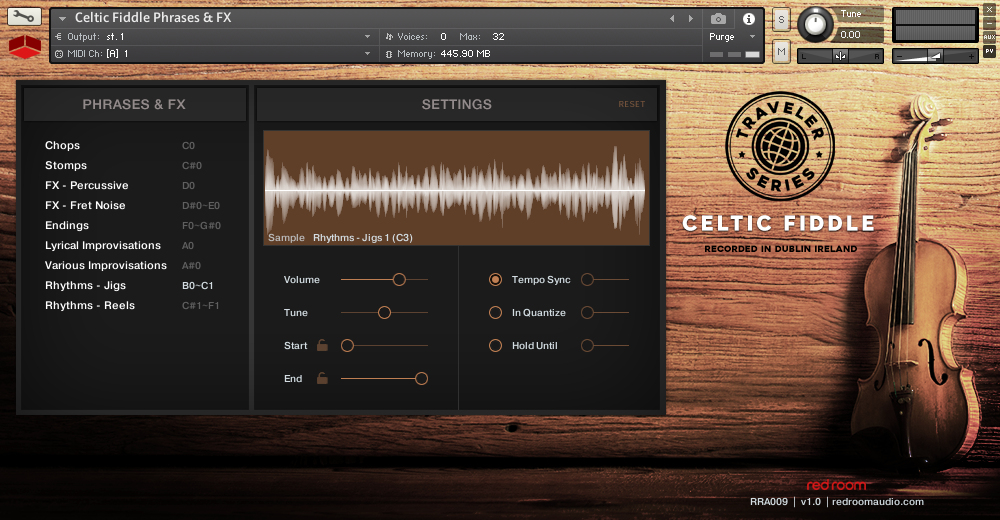