6 unique traditional Irish bodhrans recorded in Dublin, Ireland. Each sampled with 5 stick types at a variety of locations on the drum, with sound design controls, multiple dynamic layers and round robins. Change pitch and dampen realistically on the fly. Bones patch features 2 sets of bones with hits and rolls. Library also features our robust 8-slot FX rack.

Traveler Series libraries focus on delivering a genuine purity that can only be captured where the instrument and musical style originated, preserving its true character and history. We seek out a region’s most skilled and renowned performers; amazing folks with stories and bloodlines who live and breathe traditional provincial music. We leave with an education and appreciation for their culture and the role these beautiful instruments serve (as well as a tale or two of our own). We hope our Traveler Series adds an authentic native spirit to your music.

The bodhran is an Irish frame drum with an open side so one hand can be placed against the inside of the head to control the pitch and timbre. It is struck either with the bare hand or a variety of “tippers” and is said to have been developed as the “poor man’s tambourine” by farmers who couldn’t afford the metal. Bones are an instrument often used in traditional Irish folk music, as well as Bluegrass and zydeco. It consists of a pair of animal bones or pieces of wood played by holding them between the fingers and moving the wrist in such a way that they knock against each other.

For Bodhrans & Bones we journeyed to Dublin, Ireland to work with Marcin Oracki, owner and drum builder at Mighty Bodhrans. Marcin has been passionately crafting bodhrans, hosting workshops and performing live for two decades. We also had the pleasure of recording at Herbert Place Studios with producer/engineer James Darkin. Our spirited sessions were fueled by coffee, visits to Searsons Pub, and friendly personal insults and were a complete riot.

The Traveler Series Kontakt instruments feature a clean and simple, 1-page GUI with all the controls you need to get the most out of the library, including our robust 8-slot FX rack. 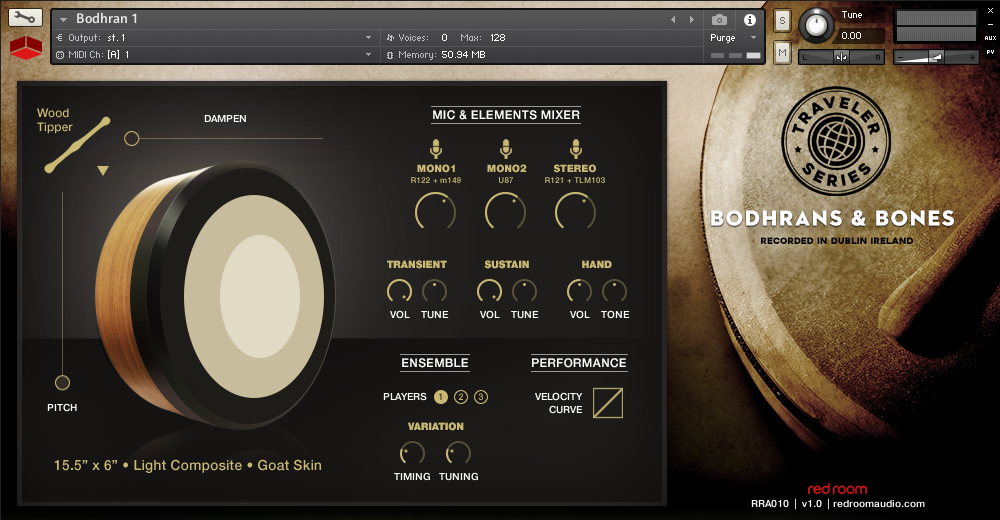 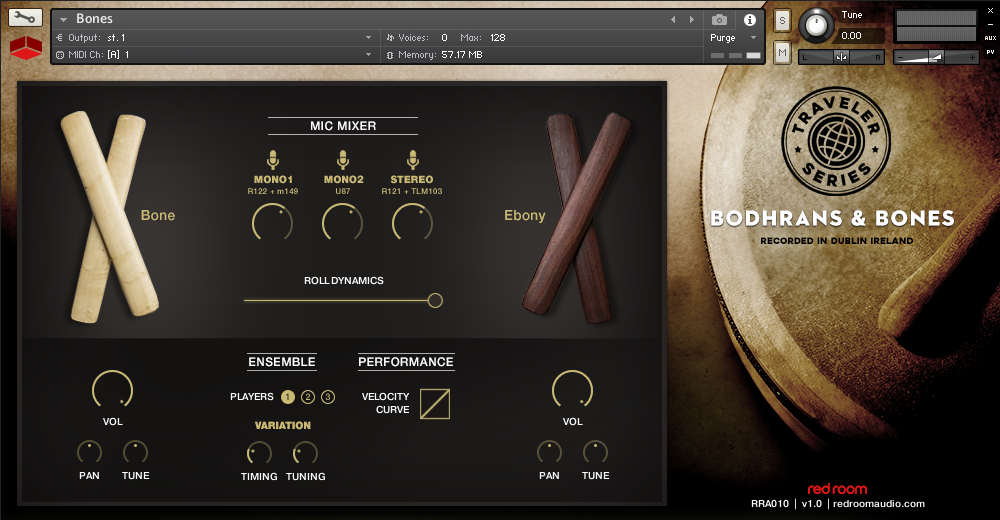